Mount Seorak, which is also known as Seolsan and Seolbongsan.

Mount Seorak was named as Seorak ('Seol' meaning 'Snow' and 'Ak' meaning 'Big Mountain') because of the snow won't melt for a very long time keeping the rocks in a permanent state of white. 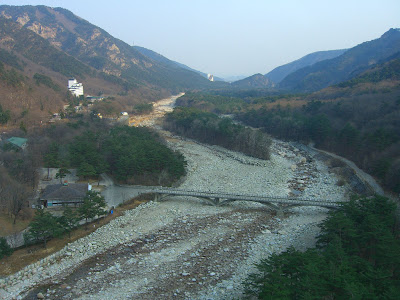 In November 1965, Soerak Mountain District was designated as a Natural Monument preservation area.

The park is spread across 4 cities and counties, which are: Sokcho, Inje, Goseong and finally, Yangyang. The highest peak is Daecheongbong; to the east is OeSeorak and to the west is NaeSeorak, which is divided again into North NaeSeorak and South NaeSeorak.

North NaeSeorak is composed of Bukcheon, which flows to Ingyecheon and Baekdamcheon streams. There are numerous valleys in NaeSeorak. Follow the Baekdamcheon valley where all the streams meet and you will reach Baekdamsa Temple, which is known for its beautiful scenery. 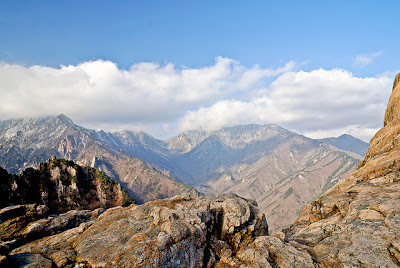 Further up is Bongjeongam (1,224m sea level). Once you are already arrive at Daecheong peak you can view the magnificent mountain range.

The sunrise viewed from here is spectacular and should not and can't be missed.

South NaeSeorak directs the valley from Oknyeotang area to Hangyeryeong. Daeseung Waterfall north of Jangsudae is the most beautiful site of NaeSeorak, which is 88m high. South of Yongdaeri valley is the twelve fairy bathing spring, Oktang Falls, and Yongtang Falls, along with several other traditional relics.